From AIOWiki
(Redirected from Complete Guide)
Jump to navigation Jump to search
The Complete Guide
Preview This Book!
{{{Preview this Book!}}} 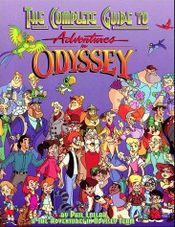 "Is Odyssey a real place? And how old is Connie, anyway?" Here's everything you always wanted to know about "Adventures in Odyssey". And then some. "The Complete Guide to Adventures in Odyssey" takes you behind the scenes for an unprecedented look at the popular, family-centered broadcasts, videos and novels, and the people who create them. Here's everything "Adventures in Odyssey" fans have ever wanted to know about their favorite radio show. This 300-page "encyclopedia" provides a behind-the-scenes look at story synopses, character histories, anecdotal trivia and much, much more from the actors and writers who were there!