From AIOWiki
Jump to navigation Jump to search
Mandy Straussberg 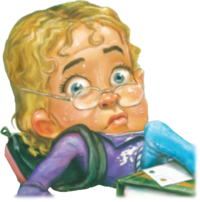 Amanda "Mandy" Straussberg is a major, long-running kid character best known around Odyssey for her talent in writing stories and plays. She has written three plays put on in the Little Theater at Whit's End (#448: “Mandy's Debut”) and a play for Kids' Radio—#453: “The Great Wishy Woz”.

Mandy's parents are Stephen Straussberg and Rachel Straussberg, and her brother is David Straussberg. Her parents separated for a time, which was hard on Mandy (the problems affecting her as far back as #580: “Tales of a Small-Town Thug”). Fortunately, they have reconciled, and now Mandy's character is back to normal.

It was revealed in #560: “The Present Long Ago” that Mandy will one day marry Odyssey Middle School's other top student, Trent DeWhite, as the result of Trent delivering her a valentine that was really from Max Hampton. As of #636: “A Class Reenactment”, she and Trent are only close friends, though many Odyssey characters, such as Connie, believe they're more than friends. She will have at least one child and two grandchildren, one named Brandon, and her brother-in-law upon her marriage will be Jared DeWhite.

Known for being sweet, Mandy tends to get along well with every other kid in town, and tries to be friendly even when her peers ignore her (#427: “Something Cliqued Between Us”) or when their name is Jared (#478: “Strange Boy in a Strange Land”). She ends up being best friends with Liz Horton.

Like Rodney Rathbone and Connie Kendall, Mandy seems to have a very fluid age. In the 1998 episode #392: “When In Doubt...Pray!”, she goes to school and thus seems to be at least 5 or 6 years old. Several weeks later in #397: “Tornado!”, she had a doll named "Polly" and seems to be about 4 or 5 years old. Six years later in #555: “True Calling”, she mentions that she is fourteen years old. Nevertheless, two years later in #597: “Out of Our Hands” reveals that her last birthday was her twelfth.

Mandy Straussberg has appeared in the following albums:

Mandy Straussberg has appeared in the following club seasons:

Mandy Straussberg has appeared on the front cover of the following album:

Mandy Straussberg has appeared on the back cover of the following album:

Mandy Straussberg has appeared in 54 episodes, has been voiced by 2 actors, and has received an average user rating of 90%.