From AIOWiki
Jump to navigation Jump to search
Camilla Parker 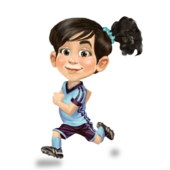 Although she's only 10 years old, Camilla Parker is already a gifted athlete at just about any sport she sets her mind to try. She doesn't mind dress-up or wearing princess clothes, but usually gets them grass-stained or torn before the afternoon is through.

Ten-year-old Camilla Parker is an energetic girl with a lot of enthusiasm for sports, animals, and even serenading mariachi bands! She occasionally gets in squabbles with her sister Olivia, but they always work it out. She used to hate going to church, but after going into the Imagination Station and witnessing Samuel being called by God in #728: “Your Servant is Listening, Part 2”, she finally became a Christian.

Her grandmother is Mexican therefore making her part Mexican. She tends to squabble with her sister a lot. She likes to play soccer but in her most recent foray into sports she's taken a position as water girl for the Odyssey Middle School basketball team.

Camilla is the youngest of three children born to David and Eva Parker. Her older siblings are Matthew and Olivia. Her maternal aunt is Aunt Rosalita. Her grandmother is Lucia (Abuelita).

Camilla Parker has appeared in the following albums:

Camilla Parker has appeared in the following club seasons:

Camilla Parker has appeared in 33 episodes, has been voiced by 3 actors, and has received an average user rating of 83.9%.