From AIOWiki
Jump to navigation Jump to search
Jay Smouse 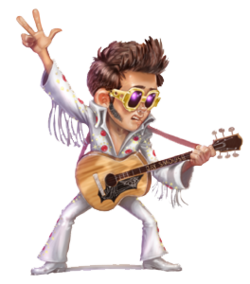 Jay Smouse is one of Odyssey's current "annoying kids", but he has a good side, unlike previous Odyssey bully Rodney Rathbone. However, he isn't as much of a threat as Rodney was. In fact, he's not a bully, but an average kid who just could use a little more love. He and Barrett Jones are sworn enemies, and Jay tries to make Barrett look as bad as possible, but will also help him in a few things.

Jay likes to make fun of people, and always tries to take the easy way out. But underneath all his tough-guy stuff, he really has a heart. For instance, once he got mistaken for a guy named Humphry, but grew to like an elderly woman named Helen Wilson. He is also known for his malapropisms. As seen in A Friend in Need Jay is scared of whaat his father thinks of him.

Jay is an acquaintance of Vance King. According to his cousin, Cindy, he has a collection of Verminoids action figures, with matching footie pajamas, and bedspread, and an Elvis jumpsuit collection. His uncle is Wally Haggler. He became very involved in The Green Ring Conspiracy figuring out things with his uncle Wally when Mr. Skint tried to frame his uncle.

His uncle is Wally Haggler, the owner of Haggler's Junk Yard. He also has an uncle Archie Haggler, who went to jail for counterfeiting. His parents are Nick Smouse and Silvia Smouse, and he has a cousin named Cindy. He also has an uncle and aunt named Reggie and Betty, one of which is a sibling of Wally and Archie. One of his grandmothers works at a supermarket, where she occasionally lets Jay ride on the electric wheelchairs.

Jay Smouse has appeared in the following albums:

Jay Smouse has appeared in the following club seasons:

Jay Smouse has appeared on the front cover of the following albums: