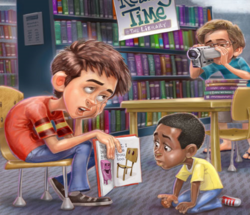 4But when the kindness and love of God our Savior appeared,

5he saved us, not because of righteous things we had done, but because of his mercy. He saved us through the washing of rebirth and renewal by the Holy Spirit, 6whom he poured out on us generously through Jesus Christ our Savior, 7so that, having been justified by his grace, we might become heirs having the hope of eternal life.

8This is a trustworthy saying. And I want you to stress these things, so that those who have trusted in God may be careful to devote themselves to doing what is good. These things are excellent and profitable for everyone.
Songs Included
[[{{{song}}}]]
Inventions Used
[[{{{invention}}}]]
Featured Charity
[[{{{charity}}}]]
Short Used
[[{{{short}}}]]
Spanish Name
{{{spanish_name}}}
Spanish Airdate
Error: Invalid time.
Soundtrack length
2:00
Previous title
“{{{name2}}}”
Host
Chris Anthony
Written by
Marshal Younger
Dave Arnold
Directed by
Dave Arnold
Produced by
Nathan Hoobler
Executive Producer
Dave Arnold
Post-Production by
Jonathan Crowe
Production Assistant
[[{{{production_assistant}}}]]
Engineered by
Unknown
Music by
John Campbell
Songs by
Unknown
Other websites

After Jay breaks into Whit's End late at night, Whit sentences him to an unusual punishment - thirty days of kindness

When a video shoot at Whit's End goes horribly wrong, Jay and Brian find themselves in Mr. Whittaker's debt. How will they repay him? The answer: Thirty acts of kindness to the people of Odyssey-one every day for an entire month! Will they do a good job or make more trouble?