From AIOWiki
Jump to navigation Jump to search
#800: “Un-Tech the Halls” 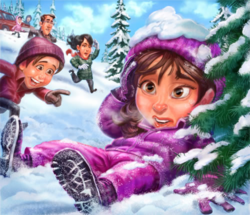 Promo
Sample
Not Available
Rating
Current user rating: 94/100% (8 votes)
You need to enable JavaScript to vote.
Where Your Treasure Is
Un-Tech the Halls
The Feud of Mason County

The Parkers decide to unplug their gadgets and make family memories by searching for a Christmas tree.

Eva Parker calls out, “Time for dinner!” No one answers. It seems that everyone is using some kind of electronic device. Matthew is playing a video game, Olivia is listening to music, Camilla is texting her friends, and even David is watching a football game on TV. Eventually, everyone arrives for dinner, but because of the wait, the chicken is cold and the dumplings are soggy. Matthew suggests ordering out for pizza. “Or,” Eva returns, “we could put down our phones and remotes, and get to the table quicker!” She notes that the “gadget use” in the house is getting a bit out of control. She then asks David to bless the food, but he’s oblivious and doesn’t respond. He is watching the game on his phone. Matthew prays instead, and the family begins eating. Suddenly, Camilla remembers that Grandma Lucia drove up into the driveway earlier, but she didn’t bother to knock or let herself in! Flustered and worried, Eva runs to the door, only to find Lucia standing on the porch – posting on her social network. She comes in, and immediately posts about that too. The kids chime in on how she had posted things about them – somewhat embarrassing things –, but David tells them to let up — until he remembers that she posted about his car trouble, too. Eva declares that it’s the holiday season; they should be socializing, and not on their phones. Suddenly, David has an inspiration boost: cutting down a Christmas tree! So it is resolved – a tech-free outing.

After everyone piles into the van (and grandma is caught for hiding her phone in her water bottle), the Parker family sets off. The family decides to pass the time by singing Christmas carols — to the chagrin of Matthew and Olivia. Eventually, the mood changes to telling stories — of how grandma survived without a cordless phone when growing up. Eva spots the perfect spot for tree hunting: an off-road path. The car turns, and the family trudges on. Eventually, Eva finds the perfect grove of trees. David parks the car, and the Parkers disembark. After a dozen tries, Matthew gets bored and starts teasing Camilla with her greatest fear – an evergreen tree limb. Camilla flees, but slips and rolls down a slope! Fortunately, she is unharmed, and even admits that she found it to be fun! Soon, the whole family is slip-sliding away. But all of a sudden, Camilla rolls into a tree... the perfect Christmas tree! David cuts it down, and the family drags it up the hill. David tells Matthew to get the rope from the car. Matthew responds that he forgot to bring it, so the family improvises by tying their belts together with their socks. They load the tree on the van and set off. After driving for some distance, looking for the main road, the car slips and falls into a ditch. Unfortunately, since no one can contact a tow truck, they’re stuck for the night.

Time passes, with no food, and the girls start making plans for their respective funerals. Matthew says there’s no need; there’s food in the car — granola bars and cheese sticks (and grandma’s fruitcake) stuck under the seats. After some prying, Eva learns that the kids have been stuffing the parts of their lunch they don’t like under the seat cushions. They simply reply that they learned it from grandma. The car is getting cold, so Eva asks David to get out and grab grandma’s Christmas gift from the trunk. When he returns, Lucia opens it – it’s a quilt! After some snuggling, David glances out and sees all of the stars in the sky. He coaxes the family to get out. The family stargazes for some time, and Camilla spots a shooting star — two shooting stars — coming right towards them. “Those are headlights, kids!” David remarks. It’s Mr. Whittaker! After some late ice fishing, he was finally driving back home, and only happy to take the family back home. The Parkers arrive to food, warmth, and electronics. Olivia makes a resolution — she’s going to take a break from social media. Everyone concurs: the most important thing for their family is not to look at social media, but to focus on each other, doing family activities together.

Camilla Parker: Grandma, you’re not posting about us, are you?
Lucia Ortega: Oh, just the food, honey; though my friends do think you all are very entertaining.
Matthew Parker: Yeah, you told them my haircut looked like a dead animal.
Camilla Parker: And that I went to school with my shirt on inside-out!
Olivia Parker: And that I dropped my phone into the toilet.
David Parker: Okay, leave your grandmother alone, kids. She doesn’t mean any harm by it. Your embarrassing moments increase her popularity.
Olivia Parker: Dad, she also posted about how you added transmission fluid into the radiator.
David Parker: You told everyone that??
Lucia Ortega: I... I got more than fifty likes on that one. Everybody thought it was hilarious! And my mechanic friend posted it on his blog: “Me-can’t-ics.” Get it? “Can’t” because... you can’t!

Camilla Parker: Please don’t tell me we’re going to have to spend the night out here.
David Parker: Okay. I won’t tell you.

Lucia Ortega: [Eating your fruitcake] would be like chewing on a log cabin....
David Parker: <to Eva> I love your food, dear.
Eva Parker: Thank you, David.
Lucia Ortega: Kiss-up.