From AIOWiki
Jump to navigation Jump to search
Simon Jones 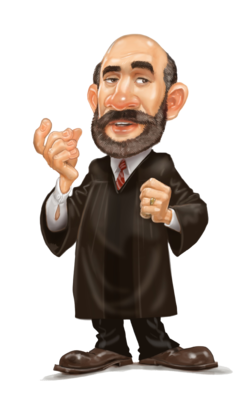 Simon is a nice man and a good, Godly father. He is a judge and as such is passionate about the law. One of his hobbies includes making his own recipe of chili, even though he's slightly allergic to chili powder.

It is mentioned that before the series Simon Jones was a brilliant student growing up. He grew up with a passion for justice and serving the community. This drove him to become a successful lawyer. It is not known if he was a public defender, a prosecutor, or maintained a private practice. Regardless of his law specialty, he was successful enough to become a judge.

He first appears in Game for a Mystery. He is constantly ordering his son Barrett to trim the hedge, showing that he apparently knows when gardening needs to be done, although it’s possible he loves it too. Upon learning that Barrett was playing his Vermanoids game instead of trimming the hedge, he grounds Barrett from playing it. Once the group finds the game, he tells Barrett that he won't be getting another game because of how much of a distraction it's become to Barrett. At the same time, he congratulates Emily for solving the mystery.

In When You're Right, You're Right he is working on a recipe of chili that includes a balance of corn chips and chili. His first attempt has no chili spice and a lot of cornmeal. After getting Emily's opinion, he comes up with a recipe, which is shown to be too spicy for Emily, as she rushes for the fridge for ice water. On his third try, he gets Emily's approval of balance. At the same time, he advises Emily on trying to find the balance between advice and expressing one's opinion.

In Emily the Genius, Simon and Dorothy are basking in pride as they get a notification that Emily is a genius. Because of this he takes Emily to his judges' chambers and tells her how proud he is of her. A few nights later, he comes home to find that Emily is missing and Barrett is playing his games again. It is only after Matthew Parker visits and informs him and Dorothy of the clerical error that Simon discovers Emily is not a genius. He finally finds her sleeping at the library, where he tells her that his love for her isn't based on her accomplishments, but just on the fact she's his daughter.

It is in Great Expectations that one of his cases is mentioned when Emily is also doing an assignment based on it. He tells her about how the case they are researching together actually takes more research. When she gives him her verdict on the case, he approves of it. When she also expresses her desire to no longer pursue his profession, he tells her that it's alright to do so. Later he and Emily go to J and J Antiques to buy a gavel.

Simon has a lovely wife named Dorothy and two kids, a son named Barrett, and a daughter named Emily.

Simon Jones has appeared in the following albums:

Simon Jones has appeared in the following club seasons: