From AIOWiki
Jump to navigation Jump to search
#898: “The Rydell Revelations, Part 1” 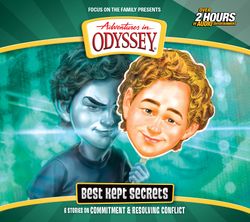 Emily Jones begins her exhaustive investigation into the mastermind behind a number of mysterious occurrences in Odyssey, including the student council election, the opened lockers, the escape room, and more.

The episode begins with a scene from #885: “Further from the Truth”, where Emily Jones is talking to Whit about who she believes is behind the strange happenings in Odyssey, though she doesn't want to say yet, because she needs "proof". The two of them agree to later regroup and share information with each other. In the next scene, Morrie Rydell runs into Whit's office, claiming that Emily kidnapped his sister. He admits to Whit that Emily is investigating Morrie as things have been weird since he came to town. He tells Whit that while working in the computer lab, he saw Emily and Suzu talking outside, fighting, and then rode their bikes. He then mentions that after he finished up cleaning his stuff in the computer lab and went home, he saw both Suzu and Emily's bikes outside, Suzu's room ransacked, and Emily's phone left behind. When asked why Emily would want to kidnap Suzu, Morrie slowly says, "Because... I think... Emily... was getting too close to the truth." Whit questions what the truth is, and Morrie refuses to answer. Upon Whit's insistence of explaining what's going one, Morrie plays some recordings on Emily's phone.

The first recording (Thursday, 1:20 pm) shows Emily talking to Zoe, who reminded her about what happened during the student body election and a note Emily received about Matthew being in the computer room. In the next recording (Thursday, 8:32 pm), Emily found the handwritten note and tried to figure out how to get Morrie to write something for her. She later concluded that she needs to sleep on it. The third recording (Friday, 2:33 am) then goes over to Emily as she was thinking about the note. She remembered The Secret of the Writer's Ruse case, and found the fake handwritten inscription of the fake Mary Malloway book. She examined both of them and concluded that while the handwriting was very close, it still doesn't prove that Morrie wrote it —- she still needs a writing sample from Morrie. Morrie then asks Whit if Whit believes everything, but Whit asks if those were all the recordings, and Morrie decides to surrender the other recordings.

The next recording (Friday, 7:02 am) then cuts into Emily staking out the Rydell house (since it was on her way to school). She then talked to Mrs. Meido, the Rydell's housekeeper, and learned that Morrie and Suzu's father was in Japan working in the US Embassy and that Mrs. Rydell died. In the next recording (Friday, 11:55 am), at school, she thought Olivia might have a note from Morrie, since he was her campaign manager for the student body election. Olivia said that all the notes were typed up, then shared how the events surrounding the drama club was rather strange and concluded that she might have been manipulated. She requested that Emily should try talking to Matthew. Emily was hesitant because he wasn't her partner anymore, but Olivia said that Matthew didn't need to be a detective to answer questions. Friday, 2:32 pm, Study Hall: When Emily talked to Matthew, he was skeptical because Morrie's handwriting didn't match the handwriting on the notes, and Morrie wasn't involved in the escape room or the Imagination Station adventure. Right before leaving, Matthew asks how Emily solved the Imagination Station adventure, and she hesitantly mentioned she had to realize that she needed Matthew to help her cope with him not being her partner anymore. He replies by saying that even though he does not want to be a detective anymore, Matthew is still willing to help Emily any way that he can, and that they are still friends.

Friday, 3:50 pm, bike racks at school: Suzu is questioned next while she is trying to rush home. When under pressure, she blurts out that "we would never have let anything happen to you". Emily accidentally knocks over Suzu's backpack and sees her notebook. 4:02 pm: Emily chases her to her house, mentions that the handwriting in the notebook matched that of the notes from the previous cases. She finds out that Suzu's room has been ransacked, footsteps are heard and there is the sound of a tussle between Suzu and Emily, and the recordings end. Whit says he believes Morrie is trying to game him, just like he's been gaming nearly everyone in Odyssey.

John Whittaker: Just be prepared. You never know what you'll find.
Emily Jones: That's another lesson I've learned from you. But, like I said, I think I know exactly who's behind all of this.