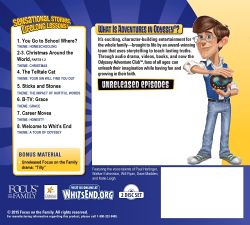 Unreleased episodes are episodes which have aired on the radio, but are not readily available from Focus on the Family.

Most Odyssey episodes are available on a series album or in a special collection such as The Lost Episodes, The Truth Chronicles, or Passages: Darien’s Rise. However, some episodes were pulled after their initial airings for various reasons, such as quality standards or content. Thirty-two of those episodes were included in albums during the Gold Audio Series. In 2014, twelve more (all containing Officer David Harley) became available on the Adventures in Odyssey Club in The Officer Harley Collection.

In the Official Guide, the special section showcasing these episodes is called The Dusty Episodes.

Reasons for being unreleased 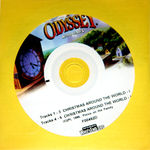 A CD with “Christmas Around the World” from Focus on the Family.

Some of these episodes were available on individual CDs exclusively through the Focus on the Family store, which were all discontinued in 2011. These episodes are also the only ones that are not available to members of the Odyssey Adventure Club. Only one is able to be heard easily: #85: “You Go to School Where?”

Under Paul McCusker as the new executive producer at the time, most pulled episodes were in the Spring 2000 season.

Six of the shorts produced for Odyssey were not included with Album #13: It All Started When..., while the rest were. Three still air on the radio.

These episodes were all written or produced to some point but never aired on the radio or were released in an album.