From 1987 until the early 2000s, Focus on the Family gave away cassette copies of Adventures in Odyssey programs to to listeners who wrote in. These tapes were originally free, but later Chris told listeners to include a "suggested donation of $5." These cassettes were eventually replaced by CDs.

Each cassette given out by Focus had an identifying number usually starting with "CC". Some episodes, such as “A Member of the Family” were given a new number when the episodes were edited to remove references to Odyssey USA, the original name of the program. 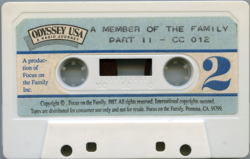 Known cassette numbers are listed below.