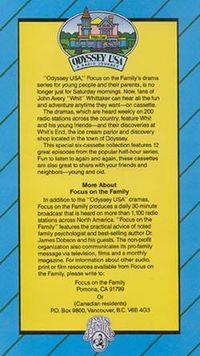 Odyssey USA was a six-cassette album released in May 1988 that contained 12 episodes of Odyssey USA, the series that would become Adventures in Odyssey.

The first 19 episodes of Adventures in Odyssey, aired in in 1987 and 1988, were broadcast under the title Odyssey USA. The Odyssey USA album contains the first fourteen episodes of series, excluding #8: “Dental Dilemma”, a remake of a Family Portraits episode, and #11: “Addictions Can Be Habit-Forming”. The album contains the original broadcast version of each episode.

Many of the episodes released in the album contain David Harley, who was later pulled from the series. These episodes include:

Both #7: “Promises, Promises” and #12: “The Tangled Web” were later edited to remove all of Harley's dialogue.

Many of the Harley episodes in the collection would not be released again for over 25 years. In 2014, most episodes with Harley were released in The Officer Harley Collection as part of the Adventures in Odyssey Club.