From AIOWiki
Jump to navigation Jump to search
#12: “Revelation Trailer” 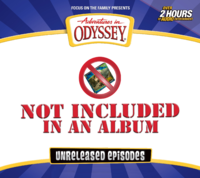 Eugene and Connie watch an interactive movie trailer for the book of Revelation.

The short starts out in a theater with Eugene asking Connie when the movie is going to start. Connie says soon and wonders if there are going to be trailers; Eugene replies "Always." The curtain then opens and the trailer starts.

An Announcer teases about the plot of the movie while the Apostle John intermittently interrupts to quote lines from the book in the Bible. The announcer finishes by saying that "If you're on the right side, you'll like the ending."

Eugene says the movie looks good, and Connie asks him if he thinks they should see it. Suddenly, the announcer says that everyone will see it. Startled, Eugene says that that was weird, followed by Connie saying it sounded "like he was talking to us." The announcer replies that he was. Connie and Eugene are mystified, and later they ask about when it's coming out. "Sooner than you think," the announcer replies. "Uh, can I go grab some popcorn first?" Eugene asks.

To which the announcer responds: "Do you really want to take that chance?"