From AIOWiki
Jump to navigation Jump to search
Robyn Jacobs 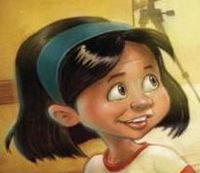 Robyn is the oldest kid of the Jacobs family, and first appeared in “A Worker Approved”, and last appeared in “Pen Pal”. However she makes a cameo appearance in “B-TV: Live!”.

Robyn is Dale and Ann Jacobs' oldest daughter. She has one sibling: Melanie Jacobs. In The Labyrinth, Part 2 Ann Jacobs notes that Robyn has moved out of the house.

Robyn is stubborn, impatient, and can be very mean at times. But deep down she has a heart of gold. She often looks for the easiest way out and desires to be the center of attention, but generally humbles herself and admits being wrong. She is sincere about her Christian faith but often isn't quite effective in sharing it with others. Despite all irritations, Robyn doesn't like Jack Davis calling her a different last name.

Robyn Jacobs has appeared in the following albums:

Robyn Jacobs has appeared in the following club seasons:

Robyn Jacobs has appeared on the front cover of the following albums:

She is in the episode *#639: “The Triangled Web, Part 2” in the CD Set after the episode in a bonus feature with Connie interviewing her on Candid Conversations With Connie.