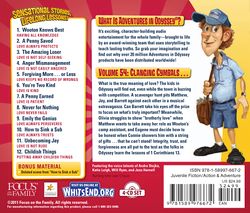 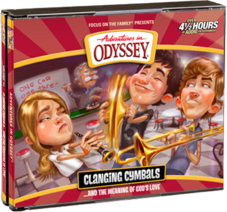 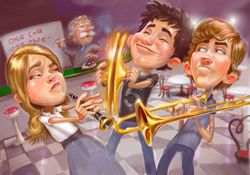 Clanging Cymbals...and the Meaning of God's Love is the 54th Adventures in Odyssey mainstream album. It was released in October 2011.

What is the true meaning of love? The kids in Odyssey will find out even while the town is buzzing with competition. A scavenger hunt pits Matthew, Jay, and Barrett against each other in a musical extravaganza. Can Barrett take his eyes off the prize to focus on what’s truly important? Meanwhile, Olivia struggles to show "brotherly love" when Matthew wants to take away her role as Wooton’s camp assistant and Eugene must decide how to be honest when Connie showers him with a string of gifts...that he can’t stand. Integrity, trust, and forgiveness are all put to the test as the folks in Odyssey learn the lessons of 1 Corinthians 13.