From AIOWiki
Jump to navigation Jump to search
Aria Curzon 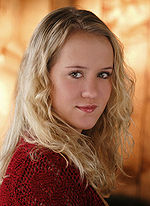 Aria Noelle Curzon (December 8, 1987) is an American voice-over actress most famous for playing Mandy Straussberg. She is an actress who refuses to act in movies that contain bad language or anything else immoral. At age five, Aria realized her interest in acting and performing. With her mother's help and care, she began auditioning, and by age six she began her acting career in a Crayola commercial. She has also been in other audio dramas, such as the Elsie Dinsmore audio series where she played Elsie. In addition to acting, she is also a musician, singing and learning both guitar and fiddle, as well as a prize-winning Irish dancer. Aria has 3 dogs, 8 cats and 2 turtles, which she enjoys playing with. Her most recent role was a waitress (minor role) in the 2011 film The Muppets.

Click one of the above tabs to see what Aria Curzon has done on Adventures in Odyssey.
Aria Curzon has acted in 58 episodes with an average rating of 90%