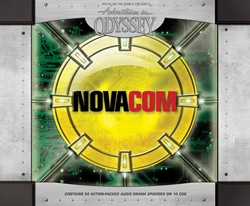 “Novacom Rules the Earth” is an episode of the Adventures in Odyssey audio series. It was written by Marsha Beeboff, and was released ~ 2000 / 2001.

A pretty normal day in Odyssey…

Alex Jefferson comes into Whit’s End and sits at the soda fountain. He’s feeling discouraged…and it’s obvious by the pained expression on his face. Alex sighs and Whit comes over and asks what’s the matter. Alex replies that all the Novacom shows on television keep featuring ads promoting an upcoming speech by Margaret Faye that will occur that day. Whit thinks that’s strange but wonders why Alex is upset. “I don’t know,” he says. “I just have a very bad feeling about it.”

At the same time across town, Margaret Faye is sitting in her large office overlooking downtown Odyssey. There is a knock on the door and a man comes in. “I think it’s time, Mrs. Bla—I mean, Ms. Faye. Your speech is in two minutes.”

The elaborate stage is set up for the big speech. All the Novacom cameras were trained on the podium in the center. Margaret walks up to the center of the platform. With all cameras rolling she begins. “Ladies and gentlemen…I must tell you. The most difficult part of being your mayor for the past term has not been making decisions, signing my name, or even the low pay. The most difficult part was…keeping the secret. My name is not Margaret Faye.”

Whispers ripple through the crowd. “My name is Margaret Blackgaard.” The crowd gasps.

“I always said my husband had recently died and he invested heavily in Odyssey. I can’t believe no one figured it out. And then there’s my second announcement. My husband died but through the miracle of cloning…he’s back!”

With that, Dr. Regis Blackgaard walks onto the stage. “That’s right!” he says. “I was cloned and now I’m back! In fact, I’ve been back for some time now. You know that little company that’s been slowly buying every business in town? Hold onto your hats! Novacom was just a façade! I have been behind it from the beginning! I now own everything in Odyssey. It’s mine…all mine!” With a vicious laugh, Blackgaard ends the conference.

Since Blackgaard now owns everything in Odyssey, the people can do nothing to stop him. He soon uses Novacom’s influence and computer savvy to start making hundreds of clones of himself. He plans an attack on all major cities in the world. He invents a virus which will transmit itself through the phone lines and destroy people’s television sets. Without TV, people will be helpless and his clones will be able to take control. The town shudders at his maniacal genius.

Blackgaard is just uploading the virus to every major city when Whit corners him in his headquarters. He holds up a piece of paper…Novacom hasn’t paid their phone bill. The virus stops uploading and Blackgaard has been beaten. Whit tells Blackgaard that there is a verse in Proverbs that deals with this very topic, but he just can’t think of it now.

To take his revenge, Blackgaard lays arson to Whit’s End and then the entire town of Odyssey. Eugene plays a somber ballad on his ukulele as the town goes up in flames.

Suddenly a beeping alarm clock is heard. Jack Allen sits bolt upright in bed. “What a strange dream,” he says.