From AIOWiki
(Redirected from Album 41)
Jump to navigation Jump to search
Album 41: In Hot Pursuit
Front   Back   3D   Art 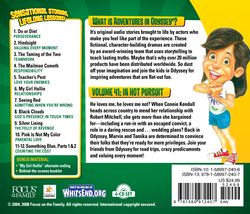 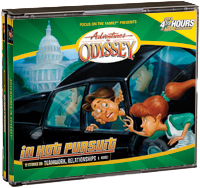 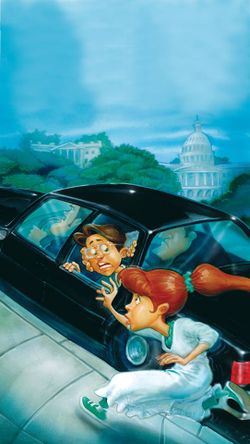 In Hot Pursuit is the 41st Adventures in Odyssey mainstream album. Its episodes began airing on the radio starting on March 22, 2003 and finished on February 7, 2004.

He loves me, he loves me not? Love—even life itself—is on the line as Connie drives all the way to Washington, D.C. to mend fences with Mitch. But his cool reception matches the frigid water that nearly cost Connie her life during a stopover in West Virginia. A sudden job opportunity abroad creates yet another crisis for their relationship. Meanwhile, Odyssey’s master of mispronunciation Bart Rathbone decides to sponsor—what else?—a Shakespeare festival. But he ends up with more theatrics behind stage than on it. Throughout these and other conflict-solving stories, kids ages 8 and up will learn that running away from a problem only makes matters worse.