Album 30: Through Thick and Thin

From AIOWiki
(Redirected from Album 30)
Jump to navigation Jump to search
Album 30: Through Thick and Thin
Front   Back   3D   Art 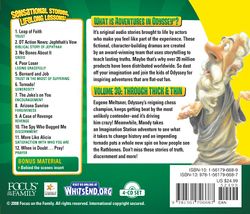 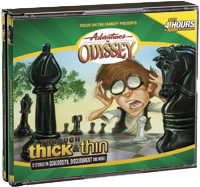 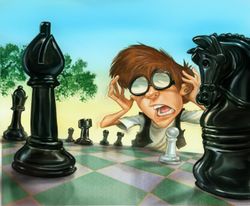 Through Thick and Thin is the 30th Adventures in Odyssey mainstream album. Its episodes began airing on the radio starting on January 10, 1998 and finished on May 2, 1998.

There’s a lot of learning going on in Odyssey these days--from good sportsmanship on the volleyball team to building trust with the Mulligans’ new foster kids. Whether from the Bible or the secret girls’ meeting next door, new discoveries continue to be made about faith, forgiveness and compassion. And it’s not easy either--a destructive tornado touches down in Odyssey, and the Rathbones are up to their old schemes.

There are no extra features on this album, but the episodes do feature a total of 12 minutes and 29 seconds of extra scenes that had to be deleted from the original broadcast versions in order to keep them at the appropriate time for the radio