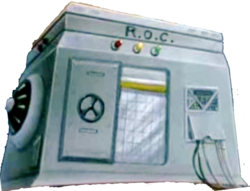 The Room of Consequence (ROC) is one of John Whittaker's many inventions. It allows the user to see the possible outcome of their actions, similar to the Imagination Station. The ROC can also give the user special abilities.

In both the video series and the audio series, the Room of Consequence seems to just "appear". The video series says that Whit had been working on it for a while, and Dylan Taylor and Sal Martinez were very anxious. The audio series introduced it as just being a new invention for somebody (in that case, Jimmy) to try.