A Twist in Time

From AIOWiki
Jump to navigation Jump to search
11: A Twist in Time 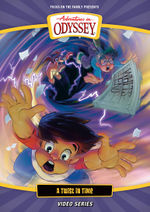 Whit is working on a secret new invention - but Dylan Taylor and his friend, Sal Martinez, can't stand the suspense of not knowing what it is. When they disregard Whit's instructions and sneak into his workshop, the boys trigger a surprising series of events that could lead to disaster for Whit's End... and Mr. Whittaker!

Whit in the future

Whit is working on a secret new invention in the basement of Whit's End. Though he tells Dylan to keep away from it, Dylan and Sal Martinez can't resist taking a peek.

While trying to hide from Eugene, they inadvertently turn the contraption on and upon emerging find themselves in the year 2047, with Whit's End in shambles, about to be demolished by its new owner, Fontaine Enterprises. Only Eugene, now a very old man, is left as caretaker. When Eugene shows the boys a videotaped message from Whit, now long gone, which shows them how worried everyone was about their disappearance, they decide that they must right the wrongs set in motion by their disobedience. With help from Whit's message, the boys escape and return to Odyssey just before Whit's End is destroyed. Whit explains to them that they snuck into the Room of Consequence, which was built to show people the consequences of their actions. The boys learn that all of our actions have consequences and that it is best to obey, even when we don't understand.