From AIOWiki
Jump to navigation Jump to search
#849: “Out to Sea” 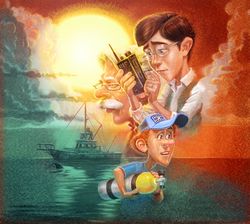 You need to enable JavaScript to vote.
The New Olivia
Out to Sea
The Shame About Fame

During a visit to the Florida Keys, an ocean getaway lands Whit, Eugene, and Wooton in a boatload of trouble.

Mr. Whittaker, Eugene and Wooton are visiting the Florida Keys, eager to go deep sea fishing following a conference where Whit demonstrated his new portable Imagination Station. Wooton has his scuba gear. Eugene wants to try out his home-made electronic fish-finder. When the trio locates the boat Wooton chartered, it's a creaky old rust-bucket that may or may not be seaworthy. But with no other options, they decide to proceed with their plans, trusting their safety to a blustery old sea dog named Captain Quid. Before long, a series of mishaps, a shark sighting, and a brewing storm place the group in peril. Ultimately, Eugene learns that God is with us, even if our journey doesn't go exactly as planned.

John Whittaker: Ahh, the fresh ocean air. It brings me back to my Navy days!
Eugene Meltsner: The salty aroma does make one crave rest and relaxation, perhaps even escape.

Melville Quid: Ahoy, ladies and gentlemen and little buccaneers! Thank ye for sailing with Quid's Penny's Worth, a one-day seafarin' tour guaranteed to be the highlight of your visit to the Florida Keys ... unless you're stayin' at the Aqua Kingdom off of Route 1 with the three-story waterslide, because let's face it, who can compete with that? I'm your captain, Melville A. Quid, survivor of two wars, three root canals and last night's five-alarm burrito at Rosie's Hacienda Palace (at least so far).

John Whittaker: Where's the cooler?
Eugene Meltsner: Don't tell me you knocked it over the side.
Wooton Bassett: OK, I won't tell you, but your tuna salad a sleeping with the fishes.

Melville Quid: Avast ye swabbies! Duct tape yer mukluks and tiptoe to Atlantis. We're not bowlin' with coconuts y'know. Quid's the name. When I say "jump," you say "what for?" Now let's get crackin' before my lumbago starts actin' up.

John Whittaker: Now remember, [God] can help you embrace all of the things going on in your life right now and find joy in them. And for what it's worth, I'm proud of the man you've become--as proud as I am of my own children.

John Whittaker: It's not safe to go in the water!
Eugene Meltsner: It's shark-infested!
Wooton Bassett: Sweet! Just like Shark Month on TV, and a lot like the members of my family who started circling after Grandpa Bassett died.

Melville Quid: Well mateys, no point burnin' out the motor or snappin' the cable. We are, as me crazy Uncle Leroy used to say, "stuck."