From AIOWiki
Jump to navigation Jump to search
#892: “Millstones” 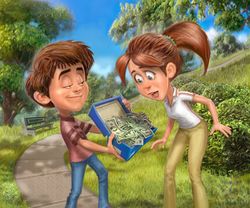 You need to enable JavaScript to vote.
Cars, Trains and Motorcycles
Millstones
Badges of Honor

Root of the Problem

2. Renee reasoned, "So not telling the truth in order to follow the higher moral law of saving an innocent life is the best choice?" Whit seemed to agree . . . this time. What do you think he would say about these scenarios:

A) You are a special agent aware that terrorists plan to blow up a crowded building. Should you lie if that's what it takes to find and defuse the bomb in time?

B) You are a pro-life crusader trying to save countless innocent babies. Does that make it OK to lie about statistics or make up stories to strengthen your argument?

C) A friend is dying—of embarrassment—after singing off-key and forgetting the words at the school talent show. What do you say when she asks, "How was it?"

3. Clearly, deciding what qualifies as a "higher moral law" can be a challenge in itself. How can making exceptions become a slippery slope if we're not careful?

4. How should Romans 13:8, John 13:34-35 and 1 Corinthians 13:13 guide our choices? What does "loving others" mean to you? Can you think of a situation where the most loving choice might upset someone or make them uncomfortable?

5. Explore the meaning of the phrase "the ends justify the means." Think of situations where you might agree or strongly disagree. Why did the end seem to justify the means in Renee's Nazi scenario, but not Connie's fundraising campaign?

6. What did Whit say about Renee's motives when she refused to hide Professor Lebernis during the first practice session? Why is it vital to understand our motives when trying to make ethical choices? Based on Proverbs 16:2, why is it a good idea to talk through key decisions with wise people willing to hold us accountable?

7. Talk about how a person can have good motives and still make bad choices. Who in this episode fits that description? Would you consider Jay's motives good or bad? Why?

8. Read 1 Corinthians 13:1-7. Which sections of that passage reflect Connie's unselfish love for Pamela? Which parts reveal her lack of love toward others as she tried to help Pamela?

9. In 2 Corinthians 8:21, the Apostle Paul wrote, "For we are taking pains to do what is right, not only in the eyes of the Lord but also in the eyes of men." Why is it important to consider both? What can happen if we ignore one or the other?