From AIOWiki
Jump to navigation Jump to search
Bill Kendall 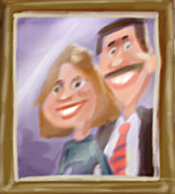 Bill Kendall is Connie's father. He was married one other time and had 4 other girlfriends after he left Connie's mom. In The Official Guide, we see that Bill Kendall was dating/married to several people named after months: June Kendall (Connie's Mom), Lindsey, Carol, April Kendall, Jan & May Kendall. He has two daughters, Connie and Jules. His mother is Mildred Kendall. He also has a sister named Helen, who is just a few years older than Connie.

Bill Kendall has appeared in 6 episodes, has been voiced by 2 actors, and has received an average user rating of 88.8%.
Retrieved from "https://www.aiowiki.com/w/index.php?title=Bill_Kendall&oldid=235527"
Categories:
Hidden categories: