And When You Pray...

From AIOWiki
Jump to navigation Jump to search
#60: “And When You Pray...”

You need to enable JavaScript to vote.
A Worker Approved
And When You Pray...
The Boy Who Didn't Go to Church

“And When You Pray...” is episode #60 of the Adventures in Odyssey audio series. It was written and directed by Paul McCusker, and originally aired on February 4, 1989.

Jimmy prays to get a bicycle and it happens. Donna is confused about the nature of prayer and so Whit gives her an object lesson. 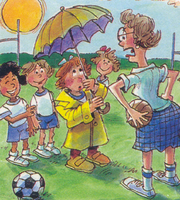 It's Saturday morning at the Barclay household. Jimmy is sitting by himself in the garage. Donna enters and tells Jimmy to shovel the snow off the sidewalk to prepare for their grandfather's visit that evening. Donna wants to know why Jimmy's out there. Jimmy says he's waiting for a bicycle. He prayed hard for one the previous evening. His friend Brad prayed for a bike and got one, so Jimmy believes it'll happen to him, too.

Donna is skeptical. She tells Jimmy prayer doesn't work that way. But Jimmy sticks to his guns. And that night, Grandpa Barclay informs Jimmy that while cleaning out the basement, he found George's old bicycle and thought Jimmy would like to have it.

Donna is stunned — Jimmy's prayer really worked! So, in bed that night, she decides to give it a try herself. As a test, she prays that God will make it rain on Monday so she won't have to go out for gym class, which she hates. To prove she really believes in the power of prayer, she dresses for school on Monday in a raincoat and galoshes. Everyone thinks Donna's crazy, including her mother and especially her gym teacher, Mrs. Butchfield. Mrs. Butchfield orders Donna out of the rain gear and into her gym outfit. Donna is bitterly disappointed and believes that God doesn't really answer prayer.

Later that day, she and Jimmy go to Whit's End. Whit has heard about Donna's prayer fiasco and is working on an invention to better explain the nature of prayer. It's a vending machine for prayers. You decide on a prayer, push a button, and out comes the answer. Jimmy thinks it's great, but Donna is understandably skeptical.

Then Whit tells them it's a joke, but says many people do think that God will give us what we want if we just push the right prayer buttons. Whit sets Jimmy and Donna straight about the real meaning of prayer. Donna says she understands — right as a peal of thunder sounds and a rainstorm begins. Doesn't God have a wonderful sense of humor?

VERSION DIFFERENCE: [view] At the end of the broadcast version of this episode, Chris and her mailman Randall read some letters from show listeners.

Donna Barclay: How do you pray, Connie?
Connie Kendall: On my knees. I used to try it flat on my back, but I kept falling asleep.

John Whittaker: I've got a button for just about everything. Money when you don't need it, good grades on a test you didn't study for, the latest fashions, the newest toys, popularity. <chuckles> What should I add?
Jimmy Barclay: Boy, I can think of a whole bunch of things!

Jimmy Barclay: You're a faithless woman.