A Flight to the Finish

From AIOWiki
Jump to navigation Jump to search
02: A Flight to the Finish 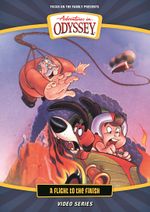 The Tri-County Junior Grand Prix has come to Odyssey, and Dylan Taylor and his dog, Sherman, are ready to put the wheel to the road! Taunted by their new neighbor - Holly Ferguson and her mischievous cat, Jasper - our heroes are determined to beat them to the checkered flag. But when Dylan's car literally explodes into action, and Holly's car careens out of control, Dylan faces a dilemma: save Holly... or win the race. It's an exciting story about caring for others and a rocket ride to the edge of adventure!

After being ridiculed by their new neighbors, Holly Ferguson and her mischievous cat Jasper, Dylan and his dog Sherman are determined to beat them in the Tri-County Junior Grand Prix.

When Dylan's car explodes into action, and Holly's car careens out of control, Dylan faces a dilemma. He can help Holly or win the race. When he chooses to save Holly, she goes on to win the race and Dylan and Sherman end up in the hospital, and Holly and Jasper look at the sky it was Raining. In the end Holly gives her trophy to Dylan, and they become friends.