From AIOWiki
Jump to navigation Jump to search
05: Star Quest 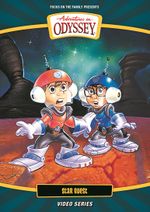 Come along for the ride in this high-flying sci-fi adventure when Dylan and his buddy Sal learn that their favorite TV show, "Star Quest," is filming in Odyssey. When Whit builds an enormous robot for the episode, Dylan and Sal are determined to get in on the lights, camera and action. But our heroes boldly go where no man has gone before when they discover this robot has a mind of his own. The sky's the limit in this thrilling voyage with a valuable lesson about jealousy and friendship.

When the TV show "Star Quest" decides to film in Odyssey, John Avery Whittaker builds an enormous robot for the episode. Dylan Taylor and his buddy Sal Martinez determine to get in on the lights, camera, and action.

But when Sal gets to be the robot's driver, Dylan is jealous.

On the second day of shooting, Sal doesn't show up, so Dylan takes control. He puts in the wrong computer disc, and the robot becomes uncontrollable. The whole town of Odyssey is in danger, until Whit, Eugene, Sal, and Dylan finally succeed in destroying the robot.