From AIOWiki
Jump to navigation Jump to search
01: The Knight Travellers 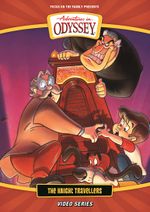 Young Dylan Taylor gets more adventure than he bargained for when he saves a mangy mutt named Sherman from an early demise — and winds up in the company of the remarkable John Avery Whittaker. They set out to retrieve Whit's Imagination Station, an amazing one-of-a-kind contraption that allows kids to see historical events first hand. The diabolical Faustus and his henchmen have stolen the Imagination Station for their own evil purposes — to change it into a Manipulation Station! In this exciting story, a young boy makes an unforgettable discovery about what is truly important in life, but is it too late to stop Faustus?

Dylan and Jesse Taylor get caught arguing over pictures of things they want in a catalog, and Mr. Taylor reprimands them and urges them to seek after things that really matter, not for material possessions.

Sent outside to cool off, Dylan interrupts Fred J. Faustus and his henchmen, who are stealing the Imagination Station. Dylan is unable to stop them, but is able to save a stray dog named Sherman, which Dylan returns to its owner, John Avery Whittaker ("Whit") at Whit's End. Whit, Eugene Meltsner, and Dylan decide to fly to Faustus' hideout in the Strata-Flyer to retrieve the Imagination Station, which Faustus has turned into the Manipulation Station, which tricks people into thinking they are getting their fondest wish while actually making them his slaves.

Whit and Dylan are trapped in the Manipulation Station, which sends them to the Dark Ages, where they are challenged to a joust by the evil Knight Faustus, aka "Knights of the Round Table" Stuff. Whit accepts the challenge as a way to get Faustus' helmet, which controls the Manipulation Station, but is accidentally knocked unconscious by Dylan, who then picks up the sword to battle Faustus himself. Faustus tries to convince Dylan to leave Whit and return to Odyssey with him, but Dylan refuses, out of friendship and loyalty to Whit.

During the joust, Whit regains consciousness and gets the helmet from Faustus. They return to Odyssey, but Faustus disappears. Whit gives Sherman to Dylan and flies off in the Strata-flyer.

Later, at home, Dylan tells his Dad that he knows that all of God's treasures are right there at home.