From AIOWiki
Jump to navigation Jump to search
Aeryk Egan 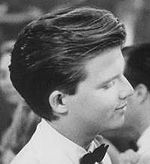 Aeryk Egan was the original voice of Dylan Taylor in Adventures in Odyssey's animated videos, including the first episode, The Knight Travellers and the second episode, A Flight to the Finish. Aeryk has appeared in numerous television shows and films including Family Ties, CBS Summer Playhouse, Empty Nest, Married with Children, Book of Love, and The Cure.

Click one of the above tabs to see what Aeryk Egan has done on Adventures in Odyssey.
Aeryk Egan has acted in 2 videos with an average rating of 88.5%