From AIOWiki
Jump to navigation Jump to search
13: Baby Daze 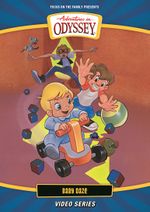 When a baby shows up on the doorstep of Whit's End, the place becomes a flurry of splattered food, dirty diapers, and talking sock-puppets! Eugene wants to study the child's behavior in the name of "science." And Dylan Taylor and Connie can only laugh at his hilarious attempts at childcare.

After conducting extensive research, Eugene Meltsner is convinced he has the ability to make a computer which learns and thinks like a human. When an abandoned baby appears on the doorstep of Whit's End in Odyssey, Eugene is delighted to have a subject for further research and decides to keep him for the weekend. He finds caring for the infant, whom he names Buddy, much harder than he expected. Exhausted, Eugene falls asleep and has a nightmare in which his computer creation, Plato, has assimilated the data regarding Buddy and having "come to life," now puts Buddy in danger by sending its robot extension after him for more data. When Eugene awakens, he realizes that Buddy is not merely something to be studied, but a human being made in the image of God and thus very special and is broken-hearted when his new friend has to leave. A man named Dr. Mueller comes to retrieve the baby, admitting that Buddy is being used for genetic research, but Eugene argues that Buddy shouldn't be used in that way and tries to keep Buddy away from Mueller. Buddy activates the remote robot, which traps Mueller and his henchmen. Later, Whit and the others enjoy a laugh looking at pictures of Buddy, now reunited with his parents, wearing a baby-sized vest and glasses given to him by Eugene.