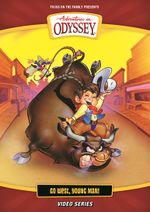 Whit has just completed the most amazing transport machine ever - the new Imagination Station! Dylan and Eugene jump in and take off on the maiden voyage to the Old West - and drop in on a frantic feud to save the town of Tuttleville from the dreadful Dalton gang. After promising that he and Eugene are committed to cleaning up the streets, Dylan discovers it's a bigger job than he ever imagined. And when faced with a showdown, Dylan must decide whether to keep his word or run for his life. Rustle up the whole family for this galloping adventure of courage and integrity.

Whit is unable to take an adventure in the new Imagination Station because he promised to attend Mrs. Harcourt's piano recital, so Eugene decides to take a break from writing his term paper and accompany Dylan on his adventure.

Dylan and Eugene arrive in Tuttleville, an Old West town, just in time to unwittingly thwart a bank robbery by Amos Dalton and save the mayor's portly red-haired daughter, Miss Lilly, who immediately falls for Eugene. When the grateful mayor makes Eugene the sheriff and Dylan his deputy, Dylan promises that he and Eugene will rid the streets of Tuttleville of criminals. After his boasting, the boys discover that Angus Dalton, Amos' older brother, has come to town and broken Amos out of jail in order to steal the town's gold shipment. When the boys meet Angus, he destroys the Imagination Station remote control, stranding them in Tuttleville.

Frightened, Dylan wants to quit and run away, but Eugene reminds him of his promise to the townspeople, so Dylan devises a plan to save the town from the Dalton gang. As high noon approaches, Eugene joins Dylan at the gold mine with the repaired remote control, by Dylan now refuses to return to Odyssey, determined to keep his promise. Inside the mine, the boys outwit the outlaws, saving the gold shipment and Miss Lilly. As they prepare to go, Dylan starts to promise to return, but stops because he has realized it's not good to make empty promises.

*In the original VHS version

**In the current version

Dylan Taylor: Eugene, tell me it was all just a bad dream.
Eugene Meltsner: I only wish it were. I've been up all night trying to repair the remote control. It's hopeless!