Once Upon an Avalanche

From AIOWiki
Jump to navigation Jump to search
06: Once Upon an Avalanche 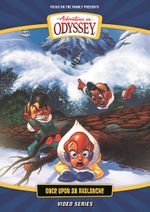 Excitement is in the air as Odyssey's Junior Woodscouts settle into Camp What-A-Nut for their winter retreat. But when Jesse Taylor wanders over from the girls' camp to give Dylan a fright, he's determined to teach her a lesson she'll never forget. With the help of his new friend, Carter Williams, Dylan takes his little sister on a hair-raising toboggan ride that plunges them right into Avalanche Canyon! While Eugene valiantly attempts to rescue the trio, Dylan, Jesse, and Carter begin a search for civilization that brings then face-to-face with an angry bear, the mysterious legend of Hatchet Jack, and a heartwarming reminder of the importance of kindness and brotherly love.

Odyssey's Junior Woodscouts are at Camp What-A-Nut for their winter retreat. As Eugene terrorizes the boys with a tale about Hatchet Jack, Jesse wanders over from the girls' camp and gives the boys a scare. Jesse only wanted to give Dylan his toothbrush, but he's so embarrassed by his little sister that he's determined to teach her a lesson she'll never forget.

The next day, Eugene leads the boys on a hike to Lookout Point, warning them to stay nearby, but Dylan and Carter head off to pretend they are Olympic bobsledders. When Jesse's sudden appearance causes the boys to crash on their sled, Dylan is further humiliated and decides to take Jesse on the ride of her life, which sends the kids on a hair-raising toboggan ride that plunges them right into Avalanche Canyon.

While Eugene and Sherman attempt to rescue the trio, Dylan, Jesse, and Carter settle in for a long, cold night in the wilderness. Still bugged by his little sister, Dylan refuses to cooperate with her, but when an avalanche separates the three children, he makes a vow to God that he will be nice to her from now on if only she is found. As the reunited trio tries to get out of Avalanche Canyon, they encounter a bear, the mysterious legend of Hatchet Jack, and finally make their way back to camp after a wild ride in a makeshift sled. Once the kids are safe and sound, Dylan realizes he loves his little sister and apologizes to her for his mean behavior.