From AIOWiki
Jump to navigation Jump to search
10: In Harm's Way 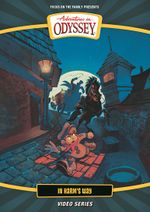 When the new kid in town isn't exactly cool, what's a guy to do? Being nice is one thing, but letting him hang around with you... well, that's another thing entirely. Can Dylan see past Elliot's "nerdy" actions to his inner value? A critical choice and a powerful lesson await in this exciting tale of friendship and love.

Dylan Taylor and Doug Harding are racing their bikes down Suicide Hill, defying danger at every turn. Dylan's hopes for victory are short-lived after Elliot, a new boy in town, runs him off the road with his butterfly net. When Elliot tries to apologize, he only makes it worse by spilling a root-beer float on Doug, who vows to get revenge. Dylan tells Elliot to bug off, explaining to Whit that he doesn't want to be friends because Elliot is weird and talks funny.

While Doug befriends Elliot, in order to use him later on, Whit sends Dylan on an Imagination Station adventure which transports him back in time, where he is held captive as a freak show exhibit in a carnival. Dylan escapes, but is mocked and feared because of his strange appearance.

Back at Whit's End, Whit explains that the adventure was based on the true story of John Merrick, who was known as "The Elephant Man," because he was born with a bone disease that left him crippled and deformed. Merrick struggled to be understood and accepted despite his deformities, as Dylan had in his adventure. Whit says that Elliot's family has moved to Odyssey in hopes of finding children who won't laugh at Elliot because he is different.

Just as he tells Dylan that Elliot talks strangely because he is deaf, they find out that Elliot is about to race down Suicide Hill with Doug. Whit, Eugene, and Dylan rush to rescue Elliot, but when Elliot's brakes fail, the two go hurtling toward a speeding train. The boys jump to safety on the runaway train, and because Elliot is able to read lips, Whit tells him how to stop the train safely. Dylan gains a new appreciation for Elliot, apologizes for his behavior, and the two become friends.