A Stranger Among Us

From AIOWiki
Jump to navigation Jump to search
12: A Stranger Among Us 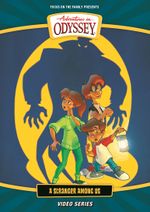 Mystery?! Well, it shouldn't be, but Connie and Dylan Taylor have gotten caught up in a mystery movie and suddenly every visitor to Whit's End looks suspicious to them. There are laughs and chills galore as Eugene tries to temper things with reason, while Connie and Dylan are positive that a stranger stranded by a storm is actually an escapee from a nearby prison! It's all downhill from there as the misguided trio learns a valuable lesson about the power of things we put into our minds.

Connie, Dylan and Eugene are alone at Whit's End while Whit is stranded outside of Odyssey during a storm. Dylan and Connie are watching a horror movie on TV — despite that fact that Eugene warns them that they should be careful about what is put in their minds. A news bulletin alerts them that a convict has escaped from Connellsville Penitentiary, and when stranded travelers stop at Whit's End for shelter, all three of them get carried away with fear. When it appears that one of the travelers, Mr. Smith, has been murdered by the other, Mr. Burnbaum, and Connie seems to disappear, they assume he is the fugitive and Eugene sets off in a mad pursuit when Mr. Burnbaum flees. Whit returns and finds Connie accidentally locked in the freezer; the traveler they presumed dead is simply in a diabetic coma and in need of insulin. After nearly killing them both, Eugene is rescued by Mr. Burnbaum. Whit makes Dylan, Eugene and Connie work overtime to make up for the damage they have done and reminds them to beware of the kind of material they put in their minds.

Eugene Meltsner: Perhaps you could've been of some help around here, had you not allowed certain elements to infect you with such wild and senseless paranoia.
Dylan Taylor: A pair of what?

John Whittaker: There it is! You can land down there next to that... guy on a skateboard?

Eugene Meltsner: Rocky! Pull this car over immediately!
Abe Burnbaum: Ya didn't like my poem?!