From AIOWiki
Jump to navigation Jump to search
03: A Fine Feathered Frenzy 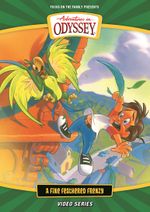 A garden tool with an appetite for destruction throws young Dylan Taylor headlong into adventure. After mowing down Evelyn Harcourt's rose garden, he's forced to pay the consequences - which include "parrot-sitting" her beloved Napoleon. But when Whit accidentally lets the bird escape, the chase is on! Can Whit and Dylan recapture Napoleon before Mrs. Harcourt returns home... or have they met their Waterloo? It's fun and excitement that shows the importance of taking responsibility for one's own actions.

Dylan Taylor accidentally sets Whit's lawnmower on a path of destruction that includes Evelyn Harcourt's rose garden. Whit and Dylan try to apologize, but because of past bad experiences with Whit, Mrs. Harcourt is unable to forgive or trust them.

Later that night, while helping his sister Jesse memorize a Bible verse, Dylan realizes he must try to make it up to Mrs. Harcourt.

To make up for the damage he has done, Mrs. Harcourt instructs Dylan to perform several tasks around her house while she is away, including babysitting her prize parrot, Napoleon, who is the only family she has left, since her family is gone and Napoleon's mate, Josephine, disappeared previously. Dylan accomplishes all of his tasks easily, until it comes time to feed and water Napoleon. The bird escapes from his cage, and as Dylan tries to catch him, Whit, who has come to apologize again to Mrs. Harcourt, accidentally lets Napoleon out the front door. Whit, Dylan, and Eugene Meltsner scour Odyssey for the next three hours, trying to find Napoleon before Mrs. Harcourt returns. They locate Napoleon on the clock tower with his mate, Josephine, and a nest of eggs. Risking life and limb, they retrieve the birds and are waiting for Mrs. Harcourt when she returns. Mrs. Harcourt is grateful and very impressed with how responsible Dylan is.