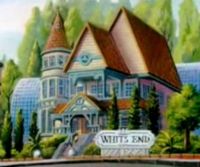 This Whit's End was initially planned to be built in the northern edge where Connellsville was growing, on the corner of Carnegie and Bristol. This suburban site would have been built across a shopping center and a housing development. However, upon Tom Riley's suggestion, Whit decided to build it in Oswald Heights.

After having some difficulty with community sentiment and trouble finding a good manager Whit eventually convinces toy inventor Ed Washington to take the job.

The writers explained that Whit's End Connellsville has not been included in many recent episodes because of its urban nature. It was designed to help show the life of kids in the city, but the writers did not have enough experience in this area to appropriately write more episodes on it. This is an example of the Timothy Center Effect. As of #852: “The Toy”, Whit's End Connellsville is still operating productively, with Ed Washington still managing.