Someone to Watch Over Me (video)

From AIOWiki
Jump to navigation Jump to search
09: Someone to Watch Over Me 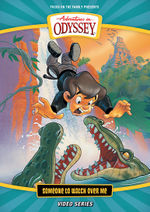 Dylan and Jesse Taylor are on a smashing imaginary safari until a glitch in the computer program causes it to end prematurely. But when Dylan goes aboard to retrieve a forgotten backpack, he's catapulted into a series of bizarre events that would amaze even inventor John Avery Whittaker. Will Dylan survive his enemy's relentless pursuit? Can anyone lead him out of this labyrinth? Gather the whole family for a rousing tale of faith, courage and mystery.

Dylan and Jesse's adventure in the Yucatan jungle ends abruptly when the Imagination Station malfunctions.

As Whit and Eugene are trying to fix the machine, Dylan enters and is suddenly catapulted into another adventure. Dylan finds himself in a World War II B-17G "Flying Fortress," flying over Nazi territory. He discovers from his companions, a navigator and Lieutenant Nagle, that he is Captain Taylor, in command. He recalls reading about the craft in a book Mr. Whittaker gave him and assumes he is in the Imagination Station.

Their plane is damaged, and they detour to take a direct route home, but their path lies over Grimmstaad's sector, Dylan's arch enemy. The plane is hit and Grimmstaad demands Dylan bail out. He jumps out the door and lands in the snow, and Nagle is there to meet him, calling him Agent 014, and steering him to a waiting 1968 Lamborghini. Nagle's plan is to smuggle Dylan past a blockade set up by his arch rival Grimkov, but before he can do so, their car is fired upon, and crashes. They begin running, but find themselves trapped. The only escape is to jump into a manhole next to the car, and Dylan finds himself falling again, this time landing on the star cruiser Wonder, now Admiral Taylor, with Nagle piloting the spacecraft.

Dylan gets tired of the recurring theme of these adventures and yells to Whit that he has had enough. Nagle comes out of character to inform Dylan that Grimm is angrier than ever, after the previous three defeats and tells him he is not in the Imagination Station and Whit cannot get him out of this adventure, but cannot explain further because the craft is attacked. Via hologram projection, Grimm demands Dylan's surrender, but Nagle secures Dylan in the escape pod and sacrifices himself to save him. Nagle appears to Dylan on the escape pod and urges him to remember something before he can leave the vessel. Dylan develops a headache and slowly remembers that he had been in the Imagination Station and fell, hitting his head. He has been in a coma for three days and the Grim Reaper — death — has been pursuing him. God sent Nagle to protect Dylan because it was not yet his time to die.

Dylan hears his dad calling and returns to consciousness.