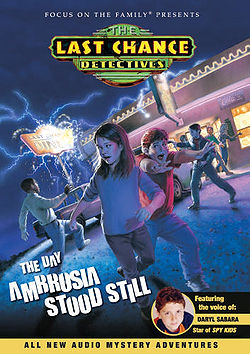 “The Day Ambrosia Stood Still, Part 4” is episode #4 of the Last Chance Detectives audio series. It was written by Marshal Younger and Robert Vernon, and was released on an unknown date.

Winnie changes her mind about taking money from a casino as the villainous duo near the hospital. Smitty and Spence rescue the three in the freezer and try to reach Martha in time. Despite the Montroses' best efforts, they are foiled in their attempt to kill Martha, and are arrested. Martha recovers, with the help of donations from people who oppose the casino thanks to Winnie's stance, and Mike Fowler assures Jason Whittaker that Ambrosia has plenty of adventures.

Selena and Frank drive to the hospital, as Selena has decided that Martha's receiving a pacemaker from Ortega will ruin their chances for the casino, since Martha will now be the sentimental favorite. Frank is unhappy about the plan, but trails along with his wife.

Winnie faces a crowd of reporters who want a statement on her taking the money from the NAIG. Upon inquisitions as to whether or not this has changed her attitude about the benefits of casinos, Winnie is forced to reconsider her opinion. After thought, she answers that her opinion has not changed, that she sees no benefits to gambling -- that it hurts people and ruins families. To illustrate her point, she tells the story of her own family: how her father, a code talker for the government, gambled away their savings in one weekend. Because of his gambling addiction, her family has no money and no insurance. After telling this, Winnie decides that she, her family and friends will raise the money for the pacemaker rather than let the NAIG pay for it.

The Sheriff and Spence arrive at the truck stop and rescue the three trapped in the freezer. There is no time for celebration, however, as they charge off to the hospital to attempt to save Martha.

After zapping the control box to the hospital so no communication can go in or out, Selena and Frank lie to the desk nurse to find out Martha's room number. When they arrive however, they are stopped by a crowd of people who are waiting to donate money to the Whitefeathers for the pacemaker.

Ben, Mike, and Spence look for a security guard, then head up towards the room as Smitty and Jason take the elevator to her floor.

Selena and Frank masquerade as doctors, but are caught by a nurse. She attempts to page Martha's doctor, but Frank zaps the PA system, which also stops the elevator. The nurse heads off to find Dr. Renquist and the pair head off to disband the crowd. They then sneak into Martha's room and attempt to send Winnie away. Winnie tells them that Martha has been moved and shows them the new room as Smitty and Jason attempt to climb out of the elevator. It begins up again and Jason is forced to leap back down into it. They are then on the right floor, but the door won't open.

Winnie lets them into Martha's new room and is sent away. Frank decides he is incapable of zapping the covered-up Martha and Selena does it herself. She then yanks down the sheet to reveal Mike Fowler. Ben and Spence pop out of the closet and Winnie tells them that Martha is still in the old room. Selena threatens to zap the entire hospital and they begin to leave. Unfortunately, Smitty and Jason meet them at the door.

After Martha greatly recovers, they all meet in her hospital room. Jason Whittaker drops in and tells them how the villainous pair was arrested and questioned -- many people will be going to jail. The entire incident also caused the townspeople to realize how seriously Winnie and her grandmother take the anti-casino stance and now oppose the new casino. Ben trips over a machine and Winnie herds him out. Jason asks if it is always so exciting in Ambrosia. Mike assures him that they have their share of adventures.