From AIOWiki
Jump to navigation Jump to search
GAP Digital 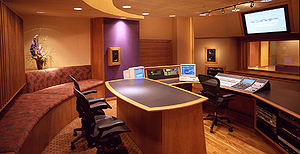 GAP Digital is a professional audio company owned and founded by a current Adventures in Odyssey sound designer, Todd Busteed. The company originally started out as Gordon Audio Productions, back in May of 1980. At that time, they were doing Sound Reinforcement work, as well as studio sessions with bands, and working in concerts in 40 states and Europe.

In 1990, they purchased their first Spectral digital workstation and changed the name of the company to GAP Digital. Within a month of getting the system, they were being contacted by other production facilities, referred to them by the factory that made the workstations. Soon after, Spectral made GAP Digital a dealer. They continued selling, training on, and installing workstations until the Fall of '98 when Spectral stopped production of all workstation products.

With the demise of Spectral, GAP Digital began a search for a replacement platform which ended with the purchase of their first Fairlight workstation.

Located in the Chicago suburb of Wheaton, their 3000 square-foot facility houses Studio A, which measures 420 square-feet, 225 square-foot Studio B with it's Foley stage, and a third room, Studio C, which features network access to all resources available in the other two rooms.

"Our goal is to provide clients with a multipurpose, 5.1-capable facility, that supports radio, audio-for-video, music,... the whole gambit of audio projects, in a visually stimulating environment," comments owner Todd Busteed. Each studio is equipped with a Fairlight MFX3Plus digital audio workstation on a Medialink network and a ProTools system. Studios A and C each house a Sony DMX-R100 digital console. A centrally located machine room networks virtually all resources in the complex and the entire facility is serviced by a 6 kva uninterrupted power supply.

One of the only U.S. recording studios specializing in the production of long-form audio drama, GAP Digital has created scores of radio dramas, including programs based on such classic stories as Victor Hugo's Les Miserables, C. S. Lewis' Chronicles of Narnia, and George Eliot's Silas Marner. The facility recently finished producing 144 half-hour episodes of a drama series titled Left Behind, based on the best-selling book series of the same name. Left Behind is being broadcast on over 700 radio stations.

Click one of the above tabs to see what GAP Digital has done on Adventures in Odyssey.
GAP Digital has produced 14 episodes with an average rating of 91.2%