The Last Chance Detectives was a series of Christian movies, books, and radio drama series produced by Focus on the Family in the late 1990s and early 2000s. The production of each video episode cost approximately one million USD. The series focused on four preteen sleuths who solve mysteries in their fictional desert town of Ambrosia, Arizona. When the radio shows were airing, Canyon Quest, a prequel book to the show, was released.

12-year-old Mike Fowler lives in the minute community of Ambrosia, Arizona (a fictional town) with his single mother and his paternal grandparents. The family runs the Last Chance Gas and Diner highway stop near the town's municipal limits, as well as the small hangar and airstrip nearby. The diner property is also home to Lady Liberty, a B-17 Flying Fortress flown by Mike's grandfather in World War II; it is in the plane that Mike and his three friends – Ben Jones, Winona "Winnie" Whitefeather, and Spencer Williams – run their detective agency called the "Last Chance Detectives". Together, they solve mysteries and have adventures, while learning Christian morals.

The radio series included a brand new cast, and Jason Whittaker, from Adventures in Odyssey in the first album. Both made by Focus on the Family, the series were partially joined together for this series. These episodes are available in the Adventures in Odyssey Club. Three albums were created: 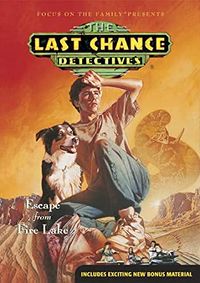 The Last Chance Detectives television films were filmed at Kingman Airport in Kingman, Arizona. Focus on the Family Films paid $3,000 to lease the land to film it there. There were three films created:

All three films of the series were adapted into books, and a fourth book was later released as a prequel to the series.

The Last Chance Detectives on Wikipedia