Mystery of the Lost Voices, Part 4

From AIOWiki
Jump to navigation Jump to search
#8: “Mystery of the Lost Voices, Part 4” 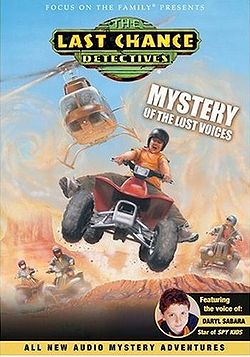 “Mystery of the Lost Voices, Part 4” is episode #8 of the Last Chance Detectives audio series. It was written by John Fornof and Robert Vernon, and was released on an unknown date.

A small, white private plane which crashed carrying Buddy Lewis and the Cats, is taken from Apache Wells. The only tapes found are ruined. Ray Barnett asks the Last Chance Detectives for their forgiveness and tells them how much he wants to have his name cleared. They reluctantly forgive him. Smitty approaches the gang and asks them to unofficially look around because of a rather unusual circumstance which has arisen; only two bodies were recovered from the lake. The missing one is Buddy Lewis. Smitty goes on to complain about music stars being revered as heroes, when men such as John Glenn are the real heroes. He reminds them that Glenn orbited the Earth the same day Lewis crashed. Mike immediately makes a connection and dashes off.

Mike sends Ben off to find Ray Barnett and the other three head off to El Dorado -- to find Crazy Carl. He reminds them of how Carl talked about John Glenn when Bill Brannon mentioned Buddy Lewis, saying he "splashed down", and how Carl said he got the tape, jacket, and guitar from John Glenn. They consider the possibility that Carl saw the plane hit the water and thought it was John Glenn splashing down from his orbit. Mike then advances the idea that Carl is Buddy Lewis himself.

The theory is to be tested in two ways: Ben has gone to find Ray Barnett, who would know if Carl was really Lewis, and the three head out to talk to Crazy Carl.

Ben finds Ray Barnett at the airport and convinces him that whatever Mike has thought of is important enough to come with him. The rest of the Detectives find Carl at his cabin. To Carl's discomfort, Mike asks him about putting the tape on the quad. Carl admits that "John Glenn told [him] to." Mike then begins asking about the crash; Carl again references John Glenn splashing down. At this, Mike asks him to tell him what John Glenn looks like. Unhappily, Carl decides he looks "like me." Mike begins asking more questions, and tells Carl to tell him the truth. At this juncture, the door opens and man walks in -- insisting that Carl doesn't lie. It's a double! Two Crazy Carls! Carl refers to the new Carl as John Glenn. Winnie correctly surmises that this would make him the real Buddy Lewis. Spence attempts to call Ray Barnett, but Buddy snatches the phone and tosses it into the corner. He then locks the door and comforts the upset Carl.

Despite Buddy's taking the phone, Spence had managed to hit redial: which called Ray Barnett. He and Ben listen in on a conversation between Buddy and the Detectives in which he angrily admits to being the singer -- though "Buddy Lewis died with his friends forty years ago. I pray I'm never that man again." At that, Ray begins yelling through the phone. When Buddy doesn't answer, he hangs up and begins phoning Bill Brannon and every other media personality he knows. Ray convinces Ben to tell him where Buddy is, kicks him out of the car, and heads off for his scoop.

Back at the cabin, Buddy tells the Last Chance Detectives the story: Carl had been fishing at the lake the day the plane crashed, listening to a radio broadcast about John Glenn, who was about to splash down, returning from his space flight. The plane crashed and Carl, thinking it was John Glenn, dove into the water and pulled Buddy out of the plane. He took a dazed Buddy Lewis to the shore; when the singer awoke he became frantic, searching for his friends. Though Carl returned to the plane multiple times, he could find nothing but two reel-to-reel tapes. He then took Buddy back to his cabin and took care of him. Throughout his healing, Buddy learned from Carl, and decided he didn't want to be Buddy Lewis anymore. So he dressed alike and grew a beard like Carl -- and they passed themselves off as one person for over forty years. Buddy tells them how he planted the tape to expose Ray Barnett and asks them not to tell anyone. Winnie and Mike agree -- and Spence would, but reminds them that the phone has already contacted the scam artist -- Ray.

A news chopper begins circling the cabin and the gang rapidly comes up with a plan. Bill Brannon narrates from his sky-view: Mike, Winnie, Spence, and "an old desert rat" emerge from the cabin and run towards the quads, but are surrounded by media before they can escape. Bill approaches the "rat" and watches Buddy tune his guitar, preparing for his first performance in over forty years. Unfortunately for the listening public...it's not Buddy, and Carl cannot sing. And Bill storms off to yell at Ray Barnett.

Meanwhile, Buddy Lewis has clopped off on Winnie's horse and walks off into the distance, whistling.

Weeks later, the Last Chance Detectives have unloaded the B-17 and are preparing to say good-bye. Sheriff Smitty drops by to tell them the missing body was never found, and gives them a package. It's from Buddy Lewis! He tells them how he has been selling memorabilia anonymously online, and that Carl told him about the B-17 predicament. He hopes the contents of the package will help.

My eyes meet your eyes as the moon shines above,
I think I’m in love with you.
My hand touches your hand, though it’s soft as a dove.
I think I’m in love with you.
A warm summer breeze brings a whirl through the trees,
A whisper that says ‘I love you’.
The whisper I speak brings a smile to your cheek –
And now we both know that it’s true.
(And we both know it’s true.)

Ray Barnett: Hey, thanks for your help. I'll take it from here. This story's mine! No hard feelings, kid. (Drives off)
Ben Jones: My name... is... BEN!