From AIOWiki
Jump to navigation Jump to search
Suzu Rydell 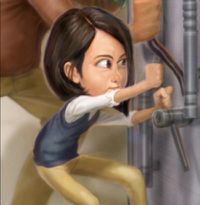 Suzu Rydell is the adopted sister of Morrie Rydell. She is good at solving mysteries, but in an introverted way, unlike Emily Jones.

Suzu is very brilliant, as shown in #804: “The Key Suspect” when she figures out how the culprit was able to make a master key and open the lockers without being seen or tripping the school alarms. At the end of the episode, she suspects that Dion was blackmailed into taking the fall for the events and asks Morrie if he was involved.

Suzu was adopted into the Rydell family, her brother is the ever-suspicious Morrie Rydell. Her father was an ambassador in Japan for the United States.

Suzu Rydell has appeared in the following albums:

Suzu Rydell has appeared in the following club seasons:

Suzu Rydell has appeared on the front cover of the following album: