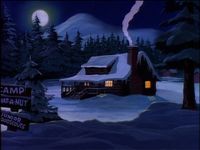 Camp What-A-Nut is a children's camp located in a wooded setting "far out" (according to Ned Lewis) from Odyssey — as in, far away from civilization. It has some wildlife that the campers see on occasion such as skunks, deer, bears, and wild horses, among others. Also, away from the trails, there is a waterfall and an abandoned bomb shaft (#75: “Connie Goes to Camp, Part 2”). In #37: “Camp What-A-Nut, Part 1”, Whit gave the explanation of the camp's name: it's an acronym for the camp's real name, "Wey-Aka-Tal-Ah-Nee-Tee" — an Indian phrase meaning "land that stinks like swamp." This was likely due to the pooling of water over the land after heavy rains, as explained in the later episode #92: “The Ill-Gotten Deed”. In addition to being a regular summer camp, the camp also served as a sports camp, indicating the presence of a gymnasium (#282: “The Fundamentals”). It's unknown who the principal owner of the camp is, but Chas Wentworth mentions that his father is a part owner (#37: “Camp What-A-Nut, Part 1”).