Further from the Truth

From AIOWiki
(Redirected from Further From the Truth)
Jump to navigation Jump to search
#885: “Further from the Truth” 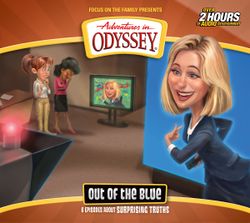 You need to enable JavaScript to vote.
Always Home
Further from the Truth
Unsinkable, Part 1

Emily finds a strange note in her locker that launches her on a mystery. The more she investigates, the more she sees that the path of clues is connected to her best friend Matthew Parker!

Morrie Rydell: Japanese is such a beautiful written language. Wish I could read it. <hands notebook to Suzu> Here you go.
Suzu Rydell: Thank you.
Morrie Rydell: Maybe you could teach me one day, huh?
Suzu Rydell: Perhaps... when you are ready to learn.

Emily Jones: This whole thing could be someone’s idea of a joke.

Emily Jones: <reading> Questions are good when asked of the right people. People are good when making a truthful choice. The wrong questions to the wrong people can be a choice gone wrong.
Morrie Rydell: Is that like a riddle?
Suzu Rydell: Sounds like a warning.

Morrie Rydell: What if someone’s helping us find proof of a wrong-doing — a mystery person helping us solve another mystery.

Emily Jones: There were gaps in the logic.