From AIOWiki
Jump to navigation Jump to search
#886: “Unsinkable, Part 1” 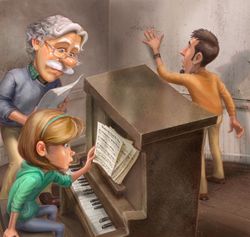 It's all hands on deck when a series of clues appears to connect Whit's End with a survivor of the Titanic.

Jason Whittaker finds a long-lost letter from a passenger of the Titanic before the ship has left. Emily Jones is playing the piano when John Whittaker walks up. She explains that she is learning the piano and found the sheet music in Whit's End.