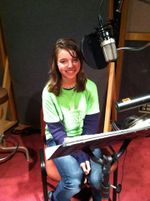 Shona Rodman (nee Kennedy) won the Adventures in Odyssey 'Get in the Show' contest, which lasted from early summer of 2012 to the 'Get in the Show!' finale on November 3, 2012. She was chosen to go to the top 12 and got voted online to make the final 3. She got in the top 3 and won the Get in the Show Finale, competing with Anya Cardwell, age 11, from Burlington, NC and Annaliese Wilford, age 14, from Millersville, MD, on November 3, 2012 in a live vote. Even though they didn't all win, the girls became very good friends. Also, all three girls received large gift bags full of Adventures in Odyssey albums. Shona appeared in Album 57: A Call to Something More for #735: “Life Expectancy, Part 2”, playing the role of Jules. She went to record in early December and all the actors for Adventures in Odyssey spoke very highly of her acting abilities.

Shona was 12 years old at the time of the episode and currently resides in Los Angeles, California. Her mom, Karen, is from Australia, her dad is from Scotland, and she has a sister named Katriona, who was her "partner" for the Get in the Show audition. Karen and Katriona would later appear in Odyssey as Lena and Teena Westcott respectively.

Read about Shona's life-changing audition in this Clubhouse article.