The Odyssey Awards, also known as the End of Season Awards or the Avery Awards, is an "awards show" of sorts to find fan favorites in recent Adventures in Odyssey seasons. Categories include things such as "best actor, best scene or best dialogue", similar to the American Academy Awards show.

In Fall 1999, Nathan Hoobler, from AIOHQ, started the first season of voting for the End of Season Awards.

For the Spring 2000 edition, Nathan teamed up with Shadowpaw (from the Soda Fountain) to do a fan poll for the awards and let the results be a community effort. This became a tradition after every new season until Fall 2006, when both webmasters became too busy to continue the awards. 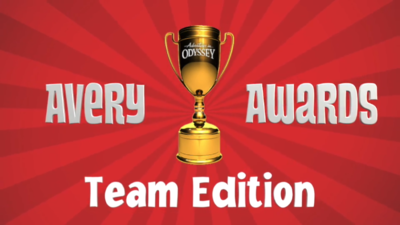 In Spring 2010, The Official Site, The Odyssey Scoop and AIOWiki teamed up to form the next generation of awards under the name The Averys.

Each edition of the Avery Awards is presented as a scripted mini audio drama, with absurd things happening to Bob and Jesse while they struggle to present the awards. Most of these episodes are written and sound designed by Kevin McCreary.