From AIOWiki
Jump to navigation Jump to search
#842: “Mean Streak” 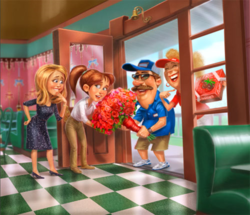 You need to enable JavaScript to vote.
Drake and the Time That Time Forgot
Mean Streak
Always Do Your Best-ish

A mean girl from Connie’s past wants to reconnect. Meanwhile, Jules hatches a plan to teach her own bully a lesson.

The episode starts off with Connie and Penny at Connie’s house when a bully from Connie’s highschool messages her and wants to reunite. Connie explains that during high school, Tiffani played pranks on, and made fun of her. Connie is suspicious of this sudden change in her tormentor’s attitude, and wonders, “Why does she really want to meet?” As the two are trying to decide whether Connie should get coffee with Tiffani or not, Jules comes home from school and complains about how Valerie was mocking her and how she couldn’t believe she actually thought they were friends. After being asked by Connie, Penny admits there was a mean girl in her high school as well. Connie and Penny tell Jules about Tiffani’s invitation, and Jules says to decline, believing Tiffani shouldn’t be trusted, and that, “Once a mean girl, always a mean girl.” Based on Tiffani’s FaceSpace account, the trio finds that Tiffani is a very successful Harvard graduate, as beautiful as ever, and is dating a beautiful guy. It appears her life is nearly perfect. Penny is annoyed, comparing Connie’s small accomplishments to Tiffani’s, but Connie remarks humbly, that she is very satisfied by the way her life is now. Jules and Penny decide her purpose is to show off and say again that Connie shouldn’t meet her, and Connie agrees. However, to her friends’ surprise, Connie messages Tiffani back, setting up a time for coffee. Connie insists that she’s happy with her life, so Tiffani can’t hurt her, by bragging about hers. As Connie runs off to get ready for work, Jules reveals to Penny that she has an idea…

The next day, Tiffani comes into Whit’s End to meet Connie. Jules and Penny, pretending to be ‘Miss Kendall’s’ assistants, remark how fortunate it was that Tiffani could get a meeting with Connie, and boast of Connie’s accomplishments, making them out to be much more important than they are. Tiffani asks if Connie is engaged or married, and as Penny sighs that she hasn’t had time to narrow down her options yet, roses and chocolates are delivered from imaginary suitors. Connie comes in, and seeing the presents, realizes what’s going on, and asks to see Penny and Jules privately. The two explain their plan, and even though Connie is against it at first, she gives in once Tiffani jokes that she expected Connie to be working at Whit’s End forever. Connie and Tiffani decide to meet for lunch the next day.

At school, everyone is complimenting Valerie on her solo in the Fall Festival, and she replies with sweet thank-yous. However, when she sees Jules, her tone changes, accusing Jules of being jealous, since she also tried out for the solo. Jules brushes her off, saying that she doesn’t care, however, she does begin to care a little more, when Miss Adelaide comes up, announcing that Channel 5 was going to be filming Valerie rehearsing her solo. Saying to herself, “One day, someone will put you in your place, Valerie Swanson.”

Later, Penny and Jules are preparing Connie and Tiffani’s lunch, when Jules decides to prank Valerie with slime from a prank company she found online. At Connie and Tiffani’s lunch, Tiffani admits that her life isn’t quite as she wishes it was, and that her boyfriend recently broke up with her. She also reveals that she was actually jealous of Connie in high school, and that she was sorry for how she treated her. Hearing her praise, Connie caves and tells Tiffani of how her life really is. Tiffani takes it well and says that it was sweet of Connie’s friends to do that for her. Tiffani then mentions how envious she and her friends were that Connie dated Jeff Lewis in high school, and Connie says that he still lives in town, and at Tiffani’s asking, says that he doesn’t have a crush on her anymore, but they do hang out sometimes. Connie suggests the three meet up to reminisce sometime soon, and Tiffani agrees. The next day at school, Valerie finds Jules standing by her locker, and when she opens it to find her lip-gloss she finds a box and begins to open it.

The scene switches over to Miss Adelaide giving a speech saying, “I told you the cameramen were coming today, and you cover yourself with green slime?!” Disappointed and angry, the teacher accuses her pupil of disgracing the school with her behavior and picks up the phone to call her parents. “My guardian,” Jules sighs, “I live with my sister, Connie Kendall.” Later at Whit’s End, Jules tells Connie that she had pushed Valerie out of the way and gotten the slime on herself, unable to go through with the prank. Connie says she’s proud of Jules for doing the right thing, then gets a call from Jeff who is looking for cupcakes for their meeting to reminisce. While Connie is on the phone, Penny and Jules sneak upstairs to get cleaned up. On the way to the storage closet, however, they hear Tiffani talking on the phone in Whit’s office. She’s confirmed to be talking to her friend Megan, speaking cruelly about Connie, calling her “idiotic.” She also reveals her true plan, to try to win Jeff over, and ditch Connie.

Upon breaking the news to a flabbergasted Connie, Penny apologizes for her nastiness, and Jules offers to speak with Tiffani. Connie takes a deep breath, and decides that if “Tiffani’s still playing the high school bully, her life must be pretty unsatisfying. I’m not going to make her life any worse by being nasty back.” However, Connie does say that Tiffani isn’t a trustworthy or healthy person for her to be around. Instead, she plans on following her highschool protocol of avoiding her as much as possible and surrounding herself with people who care about her. Jules mentions that she was right. “Once a mean girl, always a mean girl.” And Connie agrees. However, Penny contradicts their assumptions when she admits that she was the mean girl from high school and that people can change because she did. Tiffani comes back and as Jeff pulls up, she sees Jules’ left over box of slime, thinking they’re the cupcakes. Of course, when she opens the box and gets covered in green guck, she is horrified, disgusted, and green. As she panics about her slimy condition, Jeff walks in. Mortified in embarrassment, Tiffani rushes out of the building. To end the episode a confused Jeff simply asks, “Was she green?” “Uh huh” “And Jules is green?” “Yeah.” “Okay… Cupcakes?”