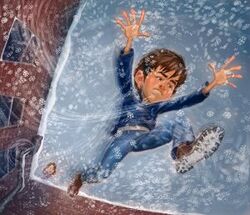 You need to enable JavaScript to vote.
Snow 'Em Who's Boss
Make Snow Mistake
The Team

While the search for Wyatt continues, Buck and Jules are stranded alone at school as our blizzard saga concludes.

This is a four-part episode, with each episode happening concurrently.

1. Do you think being snowed in with a friend—all alone in a public place—would be fun? Who would you choose to be stranded with . . . and where?

2. What do you think would've happened to Buck and Jules had Wyatt not come along? In what ways was being trapped on the roof in this episode similar to a person being trapped in sin and needing a Savior? (Ephesians 2:13, Acts 2:21)

3. How did characters in Adventure 96 made sacrifices for one another?

4. Do you believe Whit and Wooton cared for Wyatt? What did they do to show that? What does Luke 15:1-7 tell us about God's feelings for people who are lost?

5. Do you think Connie's desire to keep track of Jules with an app was unreasonable? Why or why not?

6. Share a time when you thought your parents were being too strict or protective, only to find out they were wise to be cautious. What did you learn from that?

7. When life is challenging, do you find it easy or difficult to praise God? Why is that? Read Habakkuk 3:17-19 to see how one Old Testament prophet viewed trying times.

8. Wooton said, "Waiting to hear about people you love is hard." Have you experienced this first hand? Talk about that situation. What was hard about it? What did God show you along the way?

9. When have you experienced "coincidences" that you believe were actually God at work? Check out Proverbs 16:33 and 19:21. Then take a moment to thank God for ruling over life's coincidences.