From AIOWiki
(Redirected from B-TV: Live)
Jump to navigation Jump to search 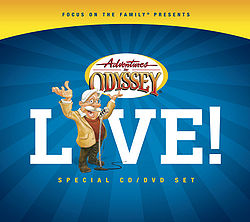 “B-TV: Live!” is a special episode of the Adventures in Odyssey audio series. It was written by Marshal Younger and Paul McCusker, was originally released on May 2009, and has not aired on the radio.

Bernard Walton, Eugene Meltsner, Connie Kendall and Wooton Bassett explore the topic of God’s unique calling for each of us and imagine what Whit’s End would be like if it was run by others.

It's a live edition of B-TV! This episode concerns God's Calling in your life.

Connie is confused by Bernard Walton's announcement, and wonders how we can discover what our calling is, and how to find it. Harlow Doyle assures her that he can find 'anything -- especially things that are found. Once he leaves, (promising to send a bill) Connie introduces a skit about Moses in the desert. Moses is uncertain about his calling, feeling inadequate for the job of leading the children of Israel out of Egypt. Connie says that it's one thing for God to speak from a burning bush, but it's more difficult to understand His calling in the lives of most people.

The audience is told how God often calls us according to our abilities -- for example, Wooton Bassett uses his skill as a writer and artist to draw PowerBoy, which teaches important lessons. Wooton reminds Connie that he was attempting to keep that a secret. Connie assures him that nothing will change now that people know he draws the comic, especially since only a few people know.

In Exaggerated Imaginings from Wooton, several special guests (Lucy Cunningham-Schultz-Davis, Jack Davis, Jimmy Barclay, and Robyn Jacobs) stop by and reluctantly admit that they let the secret slip out and now the whole world knows. At this juncture, Mandy Straussberg reveals that there is a throng of people outside waiting for Wooton.

Then Eugene decides that the program will not be complete without the person who has changed so many lives through his calling -- Mr. Whittaker. Unfortunately, he is absent, speaking at a conference on God's calling. The characters imagine what Whit's End would be like run by Eugene, Bernard, and Wooton.

Wooton's Exaggerated Imaginings resumes with the throng begging for autographs and following him wherever he goes. Bernard tells Wooton that he can use this opportunity to teach people. Wooton decides that this can become his ministry!

Then comes another break, in which Eugene tries to be Mr. Whittaker, unsuccessfully, and we learn that we must be who God wants us to be.

We then hear The Grumpy Show, which has on the Best Complainers in History. After a Bible verse, Eugene plays Have You Ever Been to Odyssey? on his ukulele.

Then comes the end of Wooton's Exaggerated Imaginings. He dejectedly informs us that his ministry isn't working out like he had hoped. When he is told he should just use his talents and follow his calling, he writes a quick Powerboy story, in which PowerBoy is a hero.

The episode wraps up with Mr. Whittaker calling in from the conference.

Julius Schnitzelbonker: I'm a poet and I finally know it. Good, huh?

Wooton Bassett: And Texas is a huge country!

Bill Podnick: <voice of Bill Cosby> This is the perfect show for you; plus they offered me a lifetime supply of jello pudding so creamy and delicious, BaHaHa!!

Connie Kendall: Do you think God has called you to preach?
Wooton Bassett: Oh, I don't know; let me check my messages.

Bernard Walton: Well, dare me to discipline and name me Dr. Dobson.

John Whittaker: Thank God for all of you, who've been such a great part of my family for such a long time.
Connie Kendall: Thank God for you, Whit. And thanks for calling in.
John Whittaker: My pleasure, Connie! I hope you all have a really good time. Bye everybody!!! --Paul Herlinger's last episode

Julius Schnitzelbonker: No matter what I do, I cannot write haiku. Boo-hoo.