From AIOWiki
Jump to navigation Jump to search
George Barclay 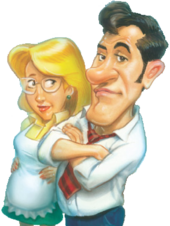 As head of the Barclay household, George wants to lead his family in a responsible manner, but sometimes fumbles. He’s a loving, well-meaning husband/father in his early forties and a hard worker, until he was laid off. After that, he answered a call to the ministry and now pastors a church in the small New England town of Pokenberry Falls.

George is the strong head of the Barclay household, with three children (Donna, Jimmy, and Stewart Reed), and is married to Mary Barclay. His father is Grandpa Barclay. He takes exception to the family's dog, Normal, but doesn't seem to mind the cat, Ferguson. In #123: “Castles and Cauldrons”, we learn that his brother, Bill Barclay, has a son: Len Barclay. We know from #191: “Moses: The Passover, Part 2” that George is the oldest of his siblings.

George tries hard to understand what his kids are going through, and attempts to lead them in a responsible manner. He fumbles occasionally, but isn't afraid to admit it, even to his kids. He often has self-doubt, but manages to make those around him feel secure, and generally finds his foot-hold soon. He was a hard worker, until he was laid off of his job. After that, he answered a call to the ministry and now pastors a church in the small New England town of Pokenberry Falls. He dearly loves his family and cares for them the best way he knows how.

George Barclay has appeared in 67 episodes, has been voiced by 2 actors, and has received an average user rating of 89.3%.